I was torn about writing this post. As this blog would suggest, I love shopping and gift-giving but I need to elaborate about what that actually means. I see shopping as an activity, a spectator sport of sorts.  I can spend a day “shopping” and not buy a single thing. I am passionate about gift-giving because of how great it feels when you show a recipient that you know who they are and what is important to them, but I also believe you can give things like your time and attention or your talents and skills. Generosity, creativity and thought when put altogether can be incredibly powerful.

I started this Black Friday doing what I normally do, tweeting Black Friday sales from my @Gift_Whisperer account and checking out what other bloggers and retailers were doing.  Then I saw something horribly disturbing.  But I’ll get to that…

As a kid, I vaguely remember making Christmas lists, but generally I had one or two major things on it–Barbies, My Little Pony, Rainbow Bright and Cabbage Patch Kids were big back then–sometimes Santa didn’t have enough of X for all the good boys and girls, maybe next year… that was that.  I remember as a kid watching the tail end of a news story about a fight breaking out about Cabbage Patch Kids and being really glad my parents didn’t have to go shopping, that I had asked Santa to get me one instead.

Getting back to this year and Black Friday, I first saw a post from BuzzFeed about a woman using a stun gun in a Black Friday stampede and then Huffington Post published this piece about a number of violent and outrageous Black Friday outbursts. That was it. I sent one last Black Friday tweet referencing a Fashionista post: 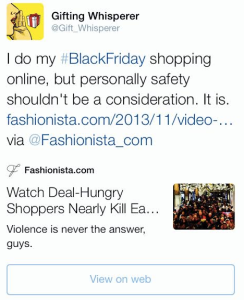 …and decided that I would not promote sales during this holiday and add to the buying frenzy.  This frenzy seems to excuse bad behavior all in the name of a good price if it means getting something for someone (or possibly for ourselves too) for less than what it usually costs. This idea of acquiring at any cost, literally, is really scary.  Yes, there have been injuries, tragically there have been fatalities, but also tragic, there have been social consequences, and there will continue to be if we don’t learn from these casualties.
I also wasn’t inspired to do my usual litany of gift guides this year.  Last November and December I did a combined 28 posts, most of which were gift ideas covering everything from pets to teachers to stocking stuffers and lots of stuff in-between. This year, I just couldn’t rally around stuff to buy.  I wrote half as many posts about things like how to deal with holiday stress, services that help share ideas with family and friends and more retrospective stuff… because I was feeling, well, reflective.  I assumed my traffic would decrease…but it didn’t. IT GREW. So thank you.
This holiday season was different for me.  It started off a bit chaotic and work was uncharacteristically busy for this time of year so I didn’t get into my ‘planning mode’ as early as I usually do.  I love my routines, they give me comfort and they are proven–actually, they have been optimized over the years–particularly my holiday routine.  Adding to all this, for our annual Christmas Eve gathering we were about to host our most ambitious number of guests ever: thirty-two. This didn’t really stress me out, that came later, I was excited…maybe a bit overwhelmed, but I kept my lists, and stuck to my mantra: “just do the next right thing.”  I asked my kids to make their lists–this would be the first year the Santa routine would not be any part of our holiday–I was stunned at how adult their lists were.; gone were any remnants of childish asks and there wasn’t a toy to be found.
As all parents do during this time of year, I did my very best to shop and purchase gifts for everyone on our list (especially the kids) that would surprise and delight, plan for our Christmas Eve gathering, wind things down at work and stay within my holiday budget (my credo: NEVER go into debt for gifts)…
And by 9pm on Christmas Eve I was feeling pretty victorious.  Our thirty-two guests had gone home, fed, stuffed, and full of holiday cheer.  We had the kitchen cleaned up pretty well and our new tradition–opening up gifts on Christmas Eve night–was about to begin.  I’m going to fast-forward here and just say, it didn’t really go as planned.  My “perfect gifts” weren’t.  They actually weren’t well-received at all. I was devastated. How could I have been so off?  And furthermore, how could they TELL me? And then I had to look at myself…how had I allowed this to happen?
What could I do now? How could I start to re-instill in my children the values of generosity, compassion, kindness, love so they aren’t the people in those Walmart videos someday? The antidote I kept coming back to was gratitude. My idea: find things to be grateful for. GRATITUDE LISTS FOR EVERYONE!

So we all sat down and started with the letter A and went all the way to the letter Z (see above) and found something to be grateful about for each letter. We all agreed to make 2014 about finding things to be grateful for, we’ll see how far we get.

In the meantime, I’m taking these lists to the framer.

One thought on “Holiday Hangover and 2014’s Grateful Resolve”