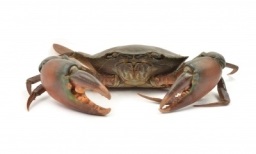 When I was a kid, my father began a very cool tradition for my birthday. I’m a July baby, which made me a Cancer–the sign associated with the crab–so every year we would go to a restaurant, called Sidewalkers, where they served a Maryland-style crab-bash. If you don’t know what a Maryland-style crab-bash is, you’re missing out. Basically you sit at a table covered with brown paper, then they dump a whole bunch of seasoned crabs in the center of a table (bibs are recommended). You are armed with a mallet, cracker and small fork and then you go at it.

The last time I celebrated my birthday in this way was 1997. It was the last time my Dad was alive for my birthday. I was 22. The morning after that celebration–about twelve hours later–he had a seizure caused by a brain tumor that he didn’t know he had and he passed away just eleven weeks later. It was the last celebration I had with him before everything changed and was the end of my birthday crab-bash tradition. That was fifteen years ago.

OUT OF THE MOUTHS OF BABES
Just a few weeks ago my daughter, Maddie (11), and son, Sean (9), were asking about traditions and with my birthday coming up the topic gravitated towards that. So I started to talk about my Dad, and the crabs, and the celebrations, and they both agreed: “that sounds so fun!” and then it occurred to me… it was. It was time.

I was on a mission, where could I have a Maryland-style crab-bash in New York City? I finally struck pay-dirt with City Crab on Park Avenue South. It wasn’t on their regular menu, but with some advance notice they could make it happen. And make it happen they did.

LOGISTICS
I used Evite to send out Save The Dates and then updated the STD theme to an invite and sent the new details to “Yeses” only once the details were confirmed. Evite comments were super handy, since I was able to keep track of any guests not able to eat crab. Because City Crab was doing this special they needed a headcount and any special dietary needs about a week in advance (but were really nice when I had a couple changes at the last minute).

I wanted to keep an ocean-life theme and first found these shell boxes ($5.25 per dozen Oriental Trading) that I totally fell in love with, so whatever favor I ended up going with had to fit in these boxes. Normally, I wouldn’t select the gift packaging first but I already knew that the favors were going to be small remembrances so the boxes would be fine. Almost immediately after, I saw these scented votive tins ($25 per dozen Oriental Trading) that I had personalized. Favors were done!

I also added a practical and thematic accent to the table by getting engraved mallets from Bay Imprint (price varies by quantity) for everyone to use and then made them pretty by tying them with ribbon. I had extras made so everyone could smash their crabs with one and have one to take home.

A yummy cake is so important…at least to me. I was turned on to Billy’s banana cake with cream cheese frosting a couple years ago and now it’s my go-to cake. I was torn between that and their coconut cake for a moment but decided not to divert from the stand-by. No one was disappointed and I HIGHLY recommend it for any party or gathering. It’s so delicious and perfect. City Crab plated it with vanilla ice cream.

We had a couple last minute changes, but everything went off without a hitch: the food, the service, the mallets and the favors were a success and everyone had a great time. I even got over my shyness (haha) and made a little toast that thanked everyone for coming, explained the significance of the meal and honored my Dad and my kids which made them (and me) feel special.

I think a tradition was reborn. What birthday traditions do you have?

4 thoughts on “A Birthday (Crab) Bash”

Earlier this week, I had fun squeezing in a few moments at the pier before heading back to NYC (the chili fries and view from the Ferris wheel are pretty amazing)... although getting home to my family beats everything ❤️ #latergram #gratefulheart #love
Strange sighting: at an early dinner with @jasondstock and found @moulinrougebway confetti lodged down my shirt (he spotted it all on his own)... this is after it was rescued.