The parent / child relationship is one of beauty and complexity. I am reminded lately of the added layers this bond must sustain when daughters start experimenting with their freedom and sexuality in adolescence. I won’t go into why I am reminded–those aren’t my stories to tell and I believe they are sacred to those individuals. What I will say is my family is near and dear to me and I am a mother and a wife. Forgive me for sharing the obvious, but before becoming a mother or a wife I was (and still am) a daughter and did a fair share of experimenting and testing bonds and bounds. My circumstances were not common, but they were not unique–nor were they often discussed until years after some damage had been done. Perhaps someday I’ll write about that (maybe, I’m still debating).

I remember going on my first date. It was a double date to see the movie Hairspray at the Lowe’s 84th Street theater on Broadway (well before it was AMC). It was 1988 and I was 13, he was 14 (about a year before the picture above was taken). His best friend and my best friend were “going-out” as of the day before. Neither my friend or I told our parents where we were going or who we were going with, and it would never even occur to me to ask him to meet my parents… forget pick me up. I was sure he would say no. I was 100% certain I wasn’t that important to him. Not that I ever asked (because what if he said no)… That decision and this belief system begat almost every other one I made about the opposite sex until I was 17 (and in some ways until I was 30). And over the next few years, with each new experience my natural ability to instinctually see my true value would slowly fall away. 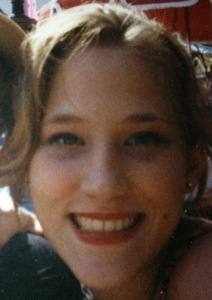 me, circa 1991, before I finally chopped off all my hair for good

Here’s a snapshot of how that would unfold… A boy would pursue me in some way–either as a conquest or to be his “girlfriend” it didn’t really matter–and I was validated as beautiful, worthwhile, important, smart, interesting… especially if he said any or all of those things to me. I falsely thought he possessed the power to make these qualities appear (I hadn’t seen them before, and it hasn’t been articulated in such a way previously) through his presence and attention–it couldn’t possibly be that those qualities attracted him in the first place? But then the inevitable would happen, we would break-up, or he would have less-than-honorable intentions and then all the good things I associated with him (about myself) would disappear as well… I believed they were a mirage… transient… vapor. Instead of understanding that these paramours (well-intentioned and otherwise) were opportunities for me to see something that was already there in the first place, shining a light on traits that they were not giving birth to, but giving context to.

You can imagine this took decades to unpack and unlearn.

My daughter is one week away from her 13th birthday. She is smart, lovely, witty, beautiful, creative, filled with internal fortitude, silly and strong. She gets insecure and sad sometimes, she can fight with me about something and then ten minutes later will want to play with her hair–she is irrational, hormonal and all this means she is 1,000,000% (nearly) a teenager.

Why do I share and say all this? I’m reminded that my experience gives me a window into what my children need to know and hear… Not just when they have a love interest and “love problems” but well before. If I don’t tell my kids how unique and precious they are independent of when potential boyfriends and girlfriends come along, there are risks. Big ones. If I don’t set an atmosphere of open dialogue where they know they can tell me anything–and yes, I mean anything–without fear of retribution or withholding of affection or approval then I will lose them or they will may get lost.

It’s easy to say “well, I turned out ok and I didn’t do all this touchy-feely, open communication stuff.” And well, yes, that may be true. For me, I had a few other things going on that allowed me (required me) to address my underlying issues and work on myself in a rigorous way for a few decades. I know I want my children to be able to talk to me… I need them to be able to talk to me, want to talk to me…about anything. That there is nothing they could say or do that will change my love for them. That it’s more than ok to ask for what you need and (rightfully) deserve, and you are empowered to respectfully communicate through words and actions when those needs aren’t met–it actually garners respect, self-respect and respect from your peers.

I’m a far cry from that teenager who was grateful for whatever time and attention was bestowed, when I was chosen. I make proactive choices, I have self-respect, I stumble sometimes, but I’ve chosen my life and have people who love me and who I love in a transformative way. The greatest gift I can give my children is to share as much of this as possible so ultimately they will have to “unlearn” as little as is necessary.

Related Posts:
Where I’m At: Getting Real
We All Need Comfort: Unicorn Gift Ideas
Passing The Baton
The Gift of Time
Dear Me: A Gift To My Younger Self

9 thoughts on “The Greatest Gift”