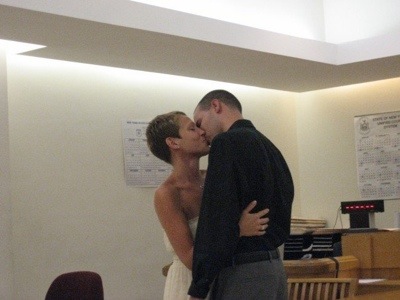 As I’ve mentioned a couple times here (feel free to eye roll or nudge anything with in reach with a ‘is she serious…a couple times?’), my husband and I are about to celebrate our fifth wedding anniversary. I think this milestone feels so miraculous because it was so unlikely. Our pairing was unlikely, I mean. At least initially (boy am I botching this up, huh?). Once it happened, it immediately felt meant to be and all the pieces fell into place, however, not without complexities. I was a divorced mom of two little ones, aged five (almost six) and three, he was newly committed to continuing education, a full-time student and embarking upon a new career. Oh, right…and he had been a life-long bachelor. To many in the outside world, these lives and lifestyles seemed disparate and “not for long.” Then a month, three months, six months passed and Hubby Man, as I affectionately call him here and everywhere, were still together and committed–or we probably should have been.

SETTING THE DATE
When Hubby Man proposed, I was truly surprised. It was totally unexpected and I was caught off-guard much like the day we met…both stories for another time. That was June 2007. What we knew was that we wanted to be married in a way that was unique, included our kids (then considered more “my kids”) in the ceremony–who were now six and four–and it had to be in New York City. We talked about Valentines Day, Arbor Day, even got a permit for Central Park. By the time we had played out every scenario, it was early July, nothing was resonating and we were arguing for the first time… ever… about what was supposed to be the happiest day of our lives. Until one morning my fiancé had a genius idea. He decided after one particularly tense discussion that he had enough, was going to set our date and I received one simple text message that said: “Third Wednesday in August we are getting married. Family court.” I knew exactly what he meant. His mom was an attorney at family court in the Bronx. It was one of the options we had discussed–getting married by one of the judges in their chambers and figuring out a celebration later. I felt such relief looking at that message and so it was decided. In six weeks we would be married. The date was set. 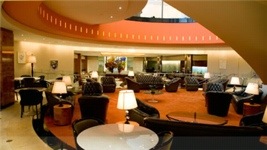 Now the planning began. With the ceremony taken care of we started looking for a restaurant to have an intimate evening dinner party after our ceremony, which would be happening early in the day. It came down to two places: Pampano, Placido Domingo‘s restaurant, and Brasserie 8 1/2, one of my very favorite places for menu and ambiance. I took Hubby Man to Brasserie 8 1/2 for a summer dinner and he concurred. We called the catering manager the next day.

INVITATIONS
We had a list…kind of. There were friends, family, but it had expanded and contracted and then I also had my grandmother who was very sick. So actually, we really didn’t have that big of a list. Did we really need invites? So we did what any normal couple would do, we typed a concise text message and sent it to the appropriate parties from our respective address books. Invites were done.

THE CEREMONY
I’ve been married before, but I did not want Hubby Man to feel cheated out of a wedding he wanted because of that. Turns out…all he wanted was to marry me. I also suspect he decided to forgo the fancy ceremony (with the bride being walked down the aisle) and reception (with dancing) because he knew this might be painful for me–my father died in 1997–and he didn’t want me to have any sadness on our happy day. I never knew for sure if he wanted a bigger ceremony and just did this for me… I suspect he did. Ya, I’m a really luck girl. Refocusing… Our ceremony was in the chambers of Justice Richardson. We said our own vows in front of our mothers, Hubby Man’s sister, nephews and niece and about five close friends–two who served as witnesses.

In the same way I was concerned about Hubby Man’s feelings, I knew even in all the excitement this was big change for the kids and my last name–a name we shared–was about to change. It was for this reason we made the exchanging of rings really special, and it was my favorite part of the ceremony. The judge spoke about what makes a family is not about the name but the love they share with each other and with that we first exchanged rings with the kids and then with each other. There wasn’t a dry eye to be found.

RECEPTION #1
Afterwards we took all the kids and went for pizza…yes, pizza. We were so close to Arthur Avenue and then we all drove home and took a nap before Hubby Man and I got ready to go take off for our “honeymoon” night at the Hudson Hotel and dinner with 50 of our closest friends and family at Brasserie 8 1/2. 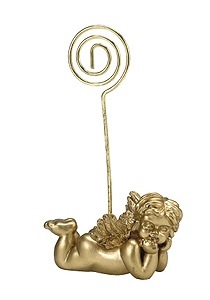 At every place setting I had a cherub place card holder ($1.29 each) that doubled as a favor with a place card that I had monogrammed with our names and our wedding date. My mom has ridiculously beautiful handwriting so instead of paying for a calligrapher she hand wrote all 50 place cards. 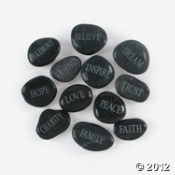 Also set at every place was an engraved rock that had one single word like: LOVE, FRIENDSHIP, HOPE, TRUST. These Faith Stones from Oriental Trading ($10.50 per dozen) were such a find and I use them all the time now for special gatherings and for less than $1 a piece they feel much more luxe than they are. We had the back half of the restaurant which was so perfect…right under the Leger mural. Funny moment…while making his toast, the best man whipped out his phone and said: “I hope everyone saved their invitation.”

AFTER PARTY (AKA: RECEPTION #2)

No one wanted the party to end. After we feasted on zucchini blossoms, filet mignon and chocolate mousse cake the party continued at the Hudson Bar at the Hudson Hotel. The Hudson Bar carved out a VIP area of white couches and tables for us (now 20) and brought over an entire wet bar thanks to one of our friends who is a mixologist. There we danced until the wee hours of the evening…Until our friends and family threw us off the dance floor and kissed and hugged us goodnight. When we finally took to our fabulous suite as Mr. and Mrs. it was 4am and we were nowhere near tired…how do you keep a day like this from ending?

To this day, our wedding remains the most amazing New York wedding I have ever attended–it just happens to have been mine. If we had tried to plan any of this, we would have surely screwed it all up. It was the perfect blend of fate and connections. Oh, and that tip about not planning a bachelor party the night before your wedding, it’s totally a good one. Let’s just leave it at that.

3 thoughts on “My Casual (But Perfect) Wedding”